Heather Acres of Devon, Alberta, Canada is a Master Facilitator for The Virtues Project™ and a community & program development specialist concentrating most of her efforts in Western Canada. She has been facilitating personal growth and character building workshops along with providing personal coaching services since 1995.

During 1998, Heather founded Virtues 2000 & Beyond, an innovative community mobilization project that integrates the strategies of The Virtues Project™ throughout the community of Flin Flon, Manitoba. Heather is a recipient of the Meritorious Service Medal awarded by Canada's Governor General. She has facilitated Virtues Project workshops for adults and youth in schools, organizations, communities, and First Nations communities throughout Canada. 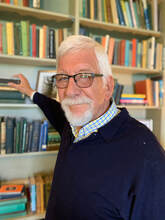 Pete Smith of Bainbridge Island, WA, has been using virtues and The Virtues Project™   strategies in his family, his marriage, and in his business for many years.  Pete is a Cornell   graduate, U.S. Submarine veteran, and businessman.

Pete and Betsy Lydle Smith facilitate workshops, retreats and webinars with couples to help   them enrich their relationships.  The Virtues and Virtues Project strategies have strengthened   their own marriage of 49 years, with communication skills, deep listening, consultation and honoring each other's spirit, bringing more joy to their relationship.

Pete's excellent listening skills, gentleness and calm manner work well with Betsy's enthusiasm,   determination, and passion.  They are both Master Facilitators for The Virtues Project™.

Their NEW online course, Building and Sustaining Lasting Love will be available in April, 2020.

Natasha Nimmo became a Virtues Project Facilitator in 2009 and became a Master Facilitator in 2016.  She has been instrumental in making Virtues one component of the Bellevue School District (WA) Bullying Prevention and Social and Emotional Learning. Parent education is one of Natasha's passions and she facilitates parent and teacher workshops.

A certificated K-8 teacher, Natasha teaches 4th grade in Bellevue Public Schools, WA, using the language of virtues to help her students be the best they can be! Proud mother of two college students, Natasha is the founder of the Parenthood Development Program that won a 2009 Promising Practice Award from the National Character Partnership. She is a certified Roots of Empathy instructor, and the former coordinator of the 40 Developmental Assets™ activities in Renton, WA. Enthusiasm, caring, generosity, commitment and excellence are among her many assets.